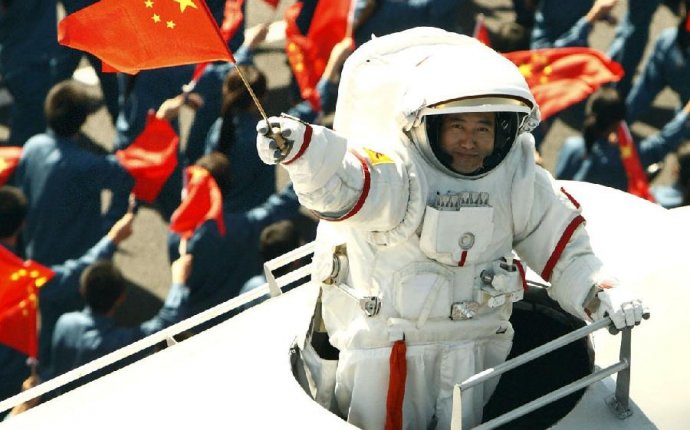 BEIJING — If the U.S.-Soviet space rivalry helped define the second half of the 20th century, China's drive to become a space superpower looks set to mark the first half of the 21st.

Scientists from around the world traveled to a remote military rocket base in the Gobi Desert to witness this latest volley in the intensifying U.S.-China space rivalry. The two-man vessel will rendezvous with a space lab launched Sept. 15, where the crew will conduct experiments for a month — China's sixth and longest manned mission so far.

With the current U.S.-led International Space Station expected to retire in 2024, China could be the only nation left with a permanent presence in space. China is "on the rise and the U.S. is in very real danger of falling behind in the future, " warned Leroy Chiao, a former NASA astronaut and veteran of four space flights, one of which included commanding the International Space Station.

Beijing is pouring money into funding the nation's ambitions — which include being the first to explore the dark side of the moon and sending a probe to Mars in 2020, the latter in direct challenge to U.S. and European space agencies.

According to 2013 estimates by the Organization for Economic Cooperation and Development, China was the second-largest spender in space with annual budget of billion — but still well behind the -billion U.S. space budget.

"China is building its own capability and their aim is clearly to become the world leader in space exploration, " Chiao told NBC News. He was the first American allowed into the Astronaut Center of China in 2006 and has visited several times since.

Mission commander Zhai Zhigang waves a small Chinese flag shortly after climbing out of the Shenzhou VII spacecraft 215 miles over the Earth on Sept. 27, 2008. China became the third nation to perform a spacewalk, after the United States and the former Soviet Union. CCTV via AFP-Getty Images, file

Despite being decades behind the U.S. space program, China is clearly catching up and using what Chinese experts call the "latecomer's advantage" — exploiting the latest technologies to leapfrog space advancements.

Last year, the country carried out 19 successful space launches — the second highest number behind Russia's 26 and ahead of America's 18 — and it is on track to launch a record of more than 20 this year. As it is, the U.S. can only send crew aloft by renting space on Russian spacecraft after it ended its space shuttle program in 2011.

These advances have not been lost on American officials. A warned that China intends "to become militarily, diplomatically, commercially, and economically as competitive as the U.S. is in space."

"We cannot resign ourselves to the remembrance of past achievements. It is time for the United States to reassert its leadership [in space], " Rep. Lamar Smith, who chairs the House committee on science, space and technology, warned on Sept. 27.

"Over the years, our focus has waned and now China's accomplishments in space have become commonplace. We cannot afford to ignore Chinese achievements and become complacent, " he added.

In its initial announcement unveiling plans for the launch, China said it aimed to grow better quality Pinot Noir and Merlot vines aboard the space lab called Tiangong-2 or "Heavenly Palace."

This does not mask the more serious purpose of the latest mission.

"Becoming an aerospace power has always been a dream we've been striving for, " declared President Xi Jinping when marking China's first Space Day on April 25. He urged the country to accelerate China's space program.

The dream is shaping up quickly.

Last month, China completed the world's biggest $180-million radio telescope, which is the size of 30 soccer fields — Xi referred to it as China's "eye in the sky." It will help map the universe and can receive signals from 13.7 billion light years away. This would give China's leaders the first chance to potentially receive communication from far-flung extraterrestrial civilizations.

To bolster this effort, China has built the world's fastest supercomputers to process the massive data involved with receiving this information.

In June, it launched a more powerful rocket, Long March 7, which has a 13-ton lifting capacity, from a brand-new space complex on tropical Hainan Island. That will be followed later this year by the even bigger rocket Long March 5, with a 25-ton lifting power that will rival anything that the Russians, Americans or Europeans have.

And in March, China unveiled a plan to build a space telescope that will be 300 times larger in coverage than the U.S. Hubble telescope. It will be located near China's future Tiangong-3 space station for easier servicing.

China has also launched the 23rd of the 35-satellite, $810 million Beidou navigation system, which will rival the U.S. Global Positioning System (GPS) and provide China with a strategic advantage in the event of hostilities.