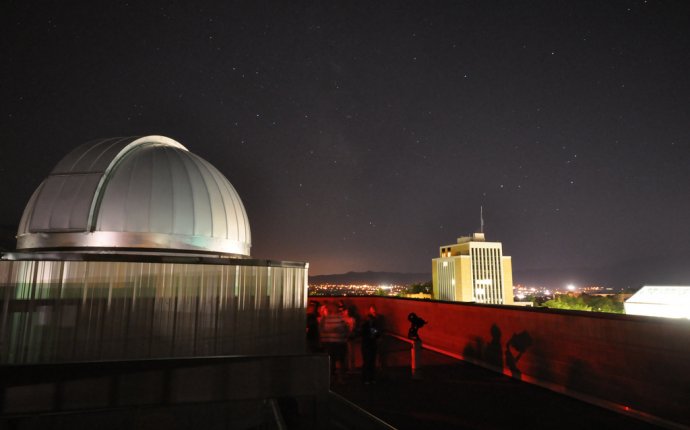 The Crow Observatory is open to the Washington University community on clear evenings, Monday through Thursday, during the fall and spring semesters. When we are on standard time, the open hours are 7:00 - 10:00 pm. When we are on daylight saving time the hours are 8 p.m. to 10 p.m.

The location is atop Crow Hall on the northeast corner of the WU Hilltop Campus. You can enter the building through the south door, then go up the stairs and follow the signs. Admission is free, and members of the campus and local community are welcome. Groups numbering seven or more, or anyone who has special requirements must make advance reservations by calling 314-935-6250 during the day.

The main telescope has an aperture of 6 inches. This telescope was acquired by Washington University in 1863; although small by present-day standards, is of excellent quality. The observatory was originally on 18th Street in St. Louis, before the University moved to the Hilltop campus after the 1904 World's Fair. Until 1950, the observatory stood west of Crow Hall. It was then closed and a new dome was constructed in the present location in 1954.

The Moon presents mountain ranges, plains, and countless craters. Best viewing is near first quarter when there is deep shadowing; near full moon, little contrast exists to bring out fine details.

The planets Venus, Mars, Jupiter, and Saturn are clearly visible at various times of the year.

"Deep-Sky Objects" located far beyond our solar system : most of these objects need a clear dark night to be seen well. On such nights, the Pleiades, or Seven Sisters star cluster, the Orion nebula, a gaseous region of star formation, and other objects can be viewed, but the atmosphere over St. Louis, as with most major cities, is not clear enough for viewing very remote or faint objects.

At the inaugural ceremonies of Washington University in 1857, William Greenleaf Eliot, the first chancellor, announced that the local philanthropist James Yeatman had donated $1, 500 for the making of a superior telescope. The lenses for the 6-inch refractor, made by Henry Fitz & Co., and refigured in 1882 by Alvan Clark & Sons, are still in use today. Because of the importance of Fitz and Clark, two of the most noted American telescope makers of the 19th century, the Smithsonian Institution has expressed an interest in the Yeatman refractor. However, no plans exist to retire the present instrument.

@BBCWorld Fantastic to help look for planet nine on a certain orbit by a robotic telescope at the university's Siding Spring Observatory.

RT @KeeleUniversity: These pictures by Nick Wright, Keele University, are out of this world! 🔭​ ​Visit Keele Observatory today and tomo… ht…

@Foxtrot44 there is an awesome telescope in Indianapolis at the Butler University campus- Holcomb observatory. They have nightly tours

RT @Icryduringsex: TO THINK I WAS READY TO GO PURSUE A DEGREE AT SAN FRANCISCO STATE UNIVERSITY FOR THESE NEXT FOUR YEARS AND NOW I SOLD OU…