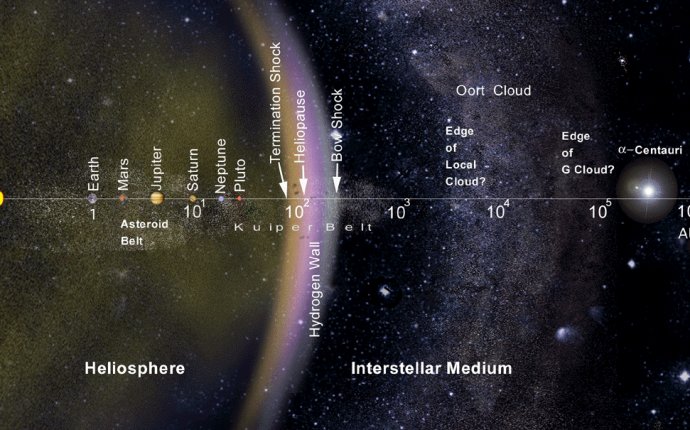 The Solar System is made up of all the planets that orbit our Sun. In addition to planets, the Solar System also consists of moons, comets, asteroids, minor planets, and dust and gas.

Everything in the Solar System orbits or revolves around the Sun. The Sun contains around 98% of all the material in the Solar System. The larger an object is, the more gravity it has. Because the Sun is so large, its powerful gravity attracts all the other objects in the Solar System towards it. At the same time, these objects, which are moving very rapidly, try to fly away from the Sun, outward into the emptiness of outer space. The result of the planets trying to fly away, at the same time that the Sun is trying to pull them inward is that they become trapped half-way in between. Balanced between flying towards the Sun, and escaping into space, they spend eternity orbiting around their parent star.

How Did The Solar System form?

Scientists believe that the Solar System evolved from a giant cloud of dust and gas. They believe that this dust and gas began to collapse under the weight of its own gravity. As it did so, the matter contained within this could begin moving in a giant circle, much like the water in a drain moves around the center of the drain in a circle.

At the center of this spinning cloud, a small star began to form. This star grew larger and larger as it collected more and more of the dust and gas that collapsed into it.

Further away from the center of this mass where the star was forming, there were smaller clumps of dust and gas that were also collapsing. The star in the center eventually ignited forming our Sun, while the smaller clumps became the planets, minor planets, moons, comets, and asteroids.

Once ignited, the Sun's powerful solar winds began to blow. These winds, which are made up of atomic particles being blown outward from the Sun, slowly pushed the remaining gas and dust out of the Solar System.

With no more gas or dust, the planets, minor planets, moons, comets, and asteroids stopped growing. You may have noticed that the four inner planets are much smaller than the four outer planets. Why is that?

Another important difference is that the outer planets are largely made of gas and water, while the inner planets are made up almost entirely of rock and dust. This is also a result of the solar winds. As the outer planets grew larger, their gravity had time to accumulate massive amounts of gas, water, as well as dust.

The Solar System Has Over 100 Worlds

It is true that there are only eight planets. However, the Solar System is made up of over 100 worlds that are every bit as fascinating. Some of these minor planets, and moons are actually larger than the planet Mercury!

Others, such as Io, have active volcanoes. Europa has a liquid water ocean, while Titan has lakes, rivers, and oceans of liquid Methane. You can read more about these amazing worlds by clicking here.

The Asteroid Belt, The Kuiper Belt, And The Oort Cloud

You have probably heard about the Asteroid Belt. This band of asteroids sits between the orbits of the planets Jupiter and Mars. It is made up of thousands of objects too small to be considered planets. Some of them no larger than a grain of dust, while others, like Eros can be more than 100 miles across. A few, like Ida, even have their own moons.

Further out, beyond the orbit of the minor planet Pluto, sits another belt known as the Kuiper Belt. Like the Asteroid Belt, the Kuiper Belt is also made up of thousands, possibly even millions of objects too small to be considered planets. A few of these objects, like Pluto, are large enough that their gravity has pulled them into a sphere shape.

These objects are made out of mostly frozen gas with small amounts of dust. They are often called dirty snowballs. However, you probably know them by their other name... comets.

Every once in a while one of these comets will be thrown off of its orbit in the Kuiper Belt and hurled towards the inner Solar System where it slowly melts in a fantastic show of tail and light.

Beyond the Kuiper Belt sits a vast area known as the Oort Cloud. Here within this jumbled disorganized cloud live millions of additional comets. These comets do not orbit the Sun in a ring or belt. Instead, each one buzzes around in a completely random direction, and at extremely high velocities.

Beyond The Oort Cloud

The Heliosphere extends out from the Sun to a distance of about 15 billion miles, which is more than 160 times further from the Sun than is the Earth.

Solar System Facts
Each page is full of fun and exciting facts about our Solar System. Take your time, and enjoy exploring our solar family.

RT @astrofactdaily: Jupiter is the only planet in the Solar System to radiate more energy than it receives from the Sun. #afod #astronomy h…

RT @chandraxray: #Today, Chandra is observing #Jupiter. The #planet is so big, all of the other planets in our solar system could fit insid…

@Ridgedog: streaming in 30 minutes! going to the further planets in the solar system in the astronomy modpack!